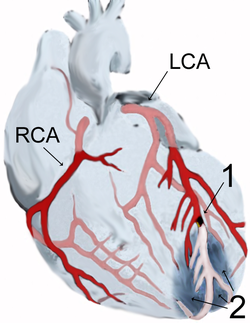 Myocardial infarction is one of the clinical forms of ischaemic heart disease that occurs with the development of ischemic necrosis of the myocardium, caused by the absolute or relative insufficiency of its blood supply.

By stages of development:

By anatomy of lesions:

By the amount of damage:

Localization of the focus of necrosis.

By the nature of the current:

It should be borne in mind that sometimes patients may have several types of myocardial infarction simultaneously or sequentially. It should be noted that the term "myocardial infarction" is not included in the concept of "necrosis of cardiomyocytes" due to сoronary artery bypass graft (opening in the ventricle, manipulations on the heart) and the influence of the following factors: renal and cardiac failure, pacing, electrophysiological ablation, sepsis, myocarditis, poisons of cardiotropic action, infiltrative diseases.

Myocardial infarction occurs as a result of a prolonged (hours) occlusion of the vessel, which supplies the heart, with a thrombus, which leads to a sharp decrease in the supply of the heart muscle, and subsequently to the death of this site. Myocardial infarction is the most common cause of disability, mortality in both developing and industrialized countries.

Myocardial infarction almost always develops against the background of cardiovascular atherosclerosis. In violation of the integrity of the atherosclerotic plaque in the lumen of the vessel, a thrombus is formed, which leads to a sudden cessation of blood flow in the arteries of the heart and myocardial infarction. Very rarely an acute impairment of the blood supply to the heart muscle can occur during prolonged spasm of the coronary arteries, for example, during physical or psycho-emotional overload.

The main symptom of myocardial infarction is a strong burning, pressing pain behind the sternum. It can spread to the left or right half of the chest, neck, hand, lower jaw, under the shoulder blade (there are different options). The pain syndrome persists for a long time, it is not removed by nitroglycerin.

Other symptoms that may occur:

Less often pain with myocardial infarction can occur in other areas:

In the first hours of acute myocardial infarction, there is a high risk of developing life-threatening violations of the heart rhythm, up to cardiac arrest. During an attack, heart failure may develop ( the inability of the heart to adequately cope with the pumping function). This is one of the most severe complications of a heart attack, which can lead to the death of a patient.

Symptoms that accompany myocardial infarction are very diverse. If you suspect a myocardial infarction, the most reasonable action will be an urgent call to a doctor, rather than self-diagnosis or self-medication. Treatment should begin as early as possible, you must immediately call the ambulance team. Before the brigade arrives, it is recommended to take a sitting position, preferably on a chair with a backrest, or a reclining position. Tight clothes should be unfasten, the tie should be loosen. Nitroglycerin should be taken immediately under the tongue. If the pain does not decrease within 5 minutes, repeat the procedure. It is desirable to chew 300 mg of aspirin. It is important to chew the pill, otherwise aspirin will not act quickly enough. In the event of cardiac arrest, cardiopulmonary resuscitation immediately begins. Its use multiplies the patient's chances of survival. Patients with suspected myocardial infarction must be taken to the clinic. After confirmation of the diagnosis, the treatment continues in the intensive care unit. You should not hesitate to call an ambulance, as the patient must be hospitalized in the hospital no later than 6 hours after the onset of a pain attack in order to avoid irreversible changes in the myocardium and possible early complications. If possible, the patient with myocardial infarction should be hospitalized in a hospital where the coronary angiography is urgently performed, as well as balloon angioplasty (opening of the vessel) and stenting (implantation of the metal framework) of the affected artery, that is, a set of measures directly affecting the cause of the vascular accident.

This pathology can be detected using ECG Dongle Full [1].