Conduction system of the heart 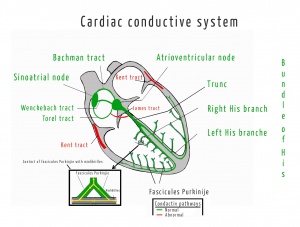 Conduction system of the heart consists of two interrelated parts: sinoatrial and atrioventricular.

Conduction system of the heart begins with a sinus node, which is located subepicardially in the upper part of the right atrium between the mouthes of the cava veins. It is a bundle of specific tissues. Its length is 10-20 mm, thickness is 3-5 mm. The node consists of two types of cells: P-cells (they generate excitation impulses), T-cells (they conduct impulses from the sinus node to the atria).

The atrioventricular node passes into the bundle of His, which consists of the penetrating (initial) and branching segments. The initial part of the bundle of His has no contacts with the contractile myocardium and is not sensitive to the lesion of the coronary arteries, but it is easily involved in the pathological processes occurring in the fibrous tissue that surrounds bundle of His. The length of the bundle of His is 20 mm.

The branches of the intraventricular conduction system gradually splits out to smaller branches and gradually pass into the Purkinje fibers, which bind directly to the contractile myocardium of the ventricles, permeating the entire muscle of the heart.

The contractions of the cardiac muscle (myocardium) occur due to the impulses arising in the sinus node and spreading through the conduction system of the heart: through the atria, the atrioventricular node, the bundle of His, Purkinje fibers. Impulses are conducted to the contractile myocardium.

In the heart there are many cells that have the function of automatism:

Normally, there is only one pacemaker. It's a sinus node, the impulses from which spread to the underlying sources of automatism before they complete the preparation of the next excitation impulse, and destroy this process of preparation. Simply put, the sinus node is normally the main source of excitation, suppressing similar signals in automatic centers of the second and third order.

Automatic centers of the second and third order manifest their function only in pathological conditions, when the automatism of the sinus node decreases, or their automatism increases.

It is possible to identify violations of the cardiac conduction system at home using the ECG Dongle [1].